SoftEther VPN (“SoftEther” means “Software Ethernet”) is one of the world’s most powerful and easy-to-use multi-protocol VPN software.

SoftEther VPN can be used to realize BYOD (Bring your own device) on your business. If you have smartphones, tablets or laptop PCs, SoftEther VPN’s L2TP/IPsec server function will help you to establish a remote-access VPN from your local network. SoftEther VPN’s L2TP VPN Server has strong compatible with Windows, Mac, iOS and Android.

Step 3: Download SoftEther either by downloading it through here and upload it to your server via FTP, or by using Lynx which is a terminal based web browser.

Step 4: Untar the file via the command:

It will create a folder named “vpnserver”.

Note: Fedora users might need to run an additional line “yum install gcc” to manually install gcc package due to “Development Tools” not including it.

Run “make” to compile SoftEther into an executable file:

Step 8: We need to change the files’ permission so we can execute it.

Copy & paste the following block of code into the newly created script:

Save and exit the file. Then make a folder “/var/lock/subsys” if the folder doesn’t exist, because when the file runs in init, a lock file will be touched here to signify that the service is running. The service won’t start or stop correctly if the lock file cannot be found by rc scripts (Starting and Stopping Services).

Change the permission of the startup script and then start the script:

Then use this command to run the script at startup:

Step 10: The SoftEther VPN service is now configured to run at system startup. To check if the server is working, type the command:

Then type “3” to access VPN Tools and then type “check” to run checking. We want the message “All checks passed” which means our server can use SoftEther VPN Server.

Step 11: Now we are going to start configuring our VPN server using vpncmd, but before that start the VPN server first:

Press “1” and Enter to start “Management of VPN Server or VPN Bridge”, then press Enter again without typing anything to connect to localhost server, then do the same again to login as server admin.

Step 12: After setting a password, we need to create a Virtual Hub to use SoftEther, which can be done using vpncmd.

In “Management of VPN Server or VPN Bridge”, type in:

Type in the password when prompted. The command above creates a Virtual Hub named “VPN”.

Step 13: Now we need to connect the Virtual Hub that was created to the server network. An easy way to do this is to use SecureNAT (Secure Network Address Translation) which combines Virtual NAT & DHCP Server functions. Enable it by typing the following command in vpncmd:

Step 14: After that, it is time to create users for Virtual Hub to use the VPN Server. This can be achieved by typing the “UserCreate” command in vpncmd:

The line above creates a user named “user1”, you can leave the additional questions blank and press Enter to skip them.

We can also check a list of created users by typing the command: 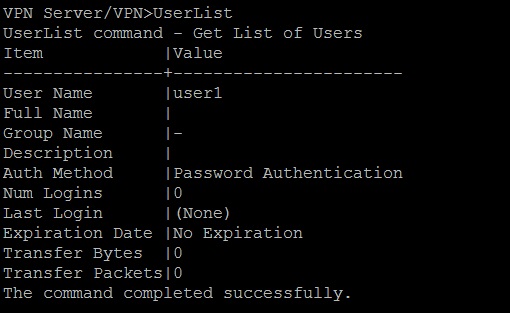 If you wish to set a password for user “user1”, type the following command:

To enable L2TP/IPSec VPN Server, type in the following command:

You will be prompted to configure the following IPSec Server Function:

Pre Shared Key for IPsec: Enter a pre-shared key to use with L2TP VPN.

Default Virtual HUB in a case of omitting the HUB on the Username: Users must specify the Virtual Hub they are trying to connect to by using “username@hubname” as their username when connecting. This option specifies which Virtual Hub to be used if the user does not provide such information. Enter “VPN”.

Secure Socket Tunneling Protocol (SSTP) is a form of VPN tunnel that provides a mechanism to transport PPP or L2TP traffic through an SSL 3.0 channel. SSL provides transport-level security with key-negotiation, encryption and traffic integrity checking. The use of SSL over TCP port 443 allows SSTP to pass through virtually all firewalls and proxy servers except for authenticated web proxies. SSTP servers must be authenticated during the SSL phase.

OpenVPN is an open-source software application that implements virtual private network (VPN) techniques for creating secure point-to-point or site-to-site connections in routed or bridged configurations and remote access facilities. It uses a custom security protocol that utilizes SSL/TLS for key exchange. It is capable of traversing network address translators (NATs) and firewalls. It was written by James Yonan and is published under the GNU General Public License (GPL). OpenVPN allows peers to authenticate each other using a pre-shared secret key, certificates, or username/password.

SoftEther VPN can clone functions of both MS SSTP VPN Server as well as OpenVPN Server, but requires an SSL cert to work, which can be generated using SoftEther’s built in command:

Note: If you already made an SSL cert by using for example OpenSSL, it can be added to the server using the command:

After creating the cert, we can download it and give it to the clients for adding as trusted via the command below:

The command saves the certificate as “cert.cer” and can be downloaded via FTP client software such as FileZilla.

Step 17: After creating and registering our SSL cert for our server, we can enable the SSTP service by using:

It will ask you which UDP port to listen for OpenVPN. Type the default value 1194 and press Enter to continue.

After we enabled OpenVPN, we can download a sample configuration file for OpenVPN Clients, or just create a sample using vpncmd’s function:

SoftEther also provides a dedicated VPN Client software for both Windows and Linux. It supports a SoftEther specific protocol called Ethernet over HTTPS or SSL-VPN which is very powerful. It uses HTTPS protocol and port 443 in order to establish a VPN tunnel, and because this port is well-known, almost all firewalls, proxy servers and NATs can pass the packet. In order to use SSL-VPN protocol, you must download and install SoftEther VPN Client, which can be obtained from their website.

We have successfully installed a multi-protocol VPN Server using SoftEther that can be connected by VPN clients using L2TP, IPSec, SSTP, OpenVPN, etc.

Also, use this command to list out which IP is currently connected to your VPN Server by typing it into the server’s terminal:

Back to KB Homepage